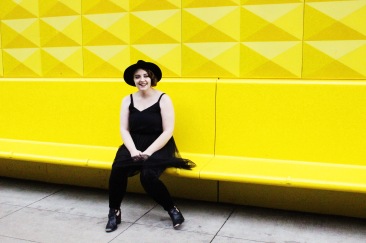 Vocal Performance and Psychology
Hannah Whitehead is a Vocal Performance and soon to be Psychology major. Her greatest passions in life include singing, theater, and gorillas (all three of which make her cry very consistently). Other things that turn on Hannah’s water works include: Fox and the Hound, Harry Potter, and puppies. If she had to choose what kind of poptart she were, Hannah would choose the unfrosted poptart because although she seems timid and bland on the outside, she is really filled with cherry love and goodness once you get to know her. Hannah has always been a performer, whether it was through singing or acting. Her love for a Capella began at a very young age when her mother showed her recordings of the CU Buffoons singing Ben Folds, and she quickly became enamored with the idea of only using voices to create a really dope song. While she entered Lark believing a Capella would be a fairly easy task to accomplish, Hannah has now learned that it is not only extremely difficult, but one of the most amazing and rewarding things she has ever done. Through singing with Lark, Hannah has created much more than just music. She has performed with some of the most amazing people and made lasting memories.

There was an error retrieving images from Instagram. An attempt will be remade in a few minutes.